George Miller of California along with 230 of his colleagues have introduced the Employee Free Choice Act — HR 800.

In essence, this Act is an attempt by the newly elected Democratic Congress to allow organized labor to eliminate an employee's right to a secret ballot election during a union organizing attempt. Stripping employees of the democratic rights and protections provided by the secret ballot election process raise very serious concerns.

The National Labor Relations Act (NLRA) provides employees with the right to form or join a union in order to collectively bargain with their employer. To be recognized by an employer, a union must demonstrate it has the support of the majority of the employees. To protect employees against undue coercion, this support is determined through a democratically-conducted election process, supervised by the National Labor Relations Board (NLRB). The process termed "secret ballot" is the same process we use in national elections throughout the country and the same process which protected members of Congress during recent leadership elections.

In recent years, organized labor has chosen to abandon this democratic process and instead rely more heavily on the "card-check" method of organizing. This "card-check" method circumvents the democratic process by allowing unions to solicit and collect signatures in a public form for union support and present the cards to the NLRB for union recognition.

With "card-check," the protections provided by the traditional balloting process — most importantly, the removal of coercion and intimidation and the safeguarding of privacy — are thrown out the window. The U.S. Supreme Court has recognized this insufficiency by noting that "card-check" is "mentally inferior to the election process."

The 109th Congress has introduced this legislation that would completely eliminate the right of workers to a secret ballot election and would replace the process with simply a process of obtaining signatures on a petition — and if 50% + 1 of the bargaining unit (a majority) sign the petition, then the union can be recognized.

This proposal could be devastating to American business and industry. As we know from 60 years of experience in conducting labor campaigns, many employees simply sign a card or petition to get the union representative off their back. They are intimidated or coerced into signing the card or have been made promises which the union cannot support. When employees are fully educated through a union campaign, many employees elect to vote "No" because the employee is educated. This is exactly why the unions are so strongly in support of this legislation — they do not want companies to educate their employees about the facts of union organizing and what unions can and cannot do.

On its face, it would be very surprising if this legislation was ever passed or not vetoed by President Bush. However, given our current political climate and the significant number of signatures on this bill, we cannot stand idly by and assume that our rights and protections that management and employees Wamplerhave worked so hard over the years to have are whisked away.

SESCO urges clients, Chambers of Commerce and business and trade associations to contact their member(s) of Congress and strongly express your concern to the proposed Employee Free Choice Act. Call us for a sample letter for distribution. 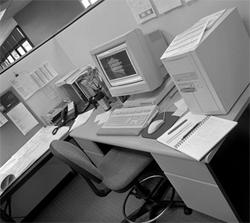 Use This Five-Step Action Plan To Deal With Employee Absenteeism

No matter what your company's policy is on absenteeism, use this five-step plan to deal with it in a fair and agreeable way:

1. Educate. Explain the policy in full to all employees. Provide them with a written plan, and meet with them to go over it. Many companies make the mistake of assuming employees understand the policy, when in fact they don't.

2. Monitor. Have a special notebook that you only use to record daily employee attendance records. Observe which employees are late, which come in early, and which are absent. If they are late or absent (or leave early), ask them for a reason. And keep a record of the reasons.

3. Counsel. If you have problem employees, meet with them in private to discuss it. Tell them what you expect, and what you have observed. Then, keep a record of these meetings.

4. Follow up. If the behavior occurs again, conduct another private meeting to find out why. Then, get ready to act. Consult your HR department for guidance on what to do next. 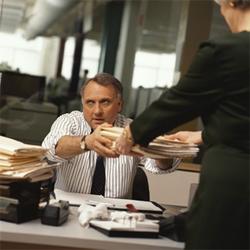 Your Company May Be Suffering From 'Employee Discontent'

There are clues you can look for to determine whether your employees are unhappy and likely to leave your organization. Fortunately, you can use those clues to turn the situation around. Here are seven warning signs to take seriously:

1. Rarely participate/provide feedback
2. Show a lack of creativity or innovation
3. Start to form cliques
4. Rush out the door at closing time
5. Seldom smile or laugh
6. Won't share their personal lives
7. Stay away from the manager

"Honesty is the cornerstone of all success, without which confidence and ability to perform shall cease to exist."
- Mary Kay Ash

"The greatest homage we can pay to truth is to use it."
- Ralph Waldo Emerson

"Honesty is the first chapter in the book of wisdom."
- Thomas Jefferson

What Are The Most Important Traits For Bosses?

By a wide margin, white-collar workers value honesty and integrity in a boss more than any other traits, according to a survey of 570 U.S. employees conducted by Right Management Consultants, a career transition firm.

When asked, "What is the most important trait or attribute that the leader of your company should possess?":

That does not mean such traits aren't highly valued, however ? just that they're not the single most important attributes workers look for in their managers.

"Stephanie is always prompt in returning our calls or e-mails and she is very knowledgeable about what we need. SESCO is excellent, it is nice to have someone we can trust."

"Stephanie went above and beyond to work with us. All feedback from management was very positive. I plan to use SESCO again for various training needs in 2007."

Question: Are we required to offer benefits to part-time employees?

Answer: Certain benefits such as unemployment and workers compensation are mandated by state law and apply to all employees.

Eligibility for voluntary benefits such as vacation, sick leave, medical insurance, life insurance, etc. is at the discretion of the employer. Eligibility for benefits is often tied to employees' normal work schedule. For example, persons working less than 32 hours in the workweek would not be eligible for benefits, or they might be eligible for certain prorated benefits. Employers should be certain that their policy is clear on what benefits are offered to full-time and part-time employees and the eligibility requirements for these benefits.

One exception is under the Employee Retirement Income Security Act (ERISA) with the "1,000 hour rule". Employees
who have completed 1,000 hours service in a period of 12 consecutive months are eligible to participate in any company pension or profit-sharing plan that is offered to other employees. This requirement applies to both full-time and part-time employees.