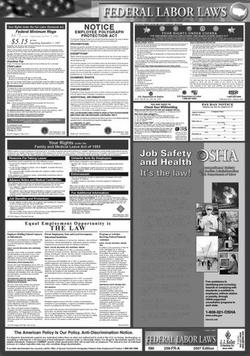 Congress passed an increase in the federal minimum wage, to become effective July 24, 2007. The current hourly minimum wage of $5.15 has been in place for the last ten years.

This increase in the federal minimum wage will obviously affect those businesses that compensate some workers at or near the current minimum wage. Subsequently, this change may impact the internal equity of pay structures of some organizations. Prior to making any across the board adjustments in the current pay scales, consider the potential impact upon practices.

SESCO provides to clients specially priced federal (and state) posters that reflect the minimum wage change. These posters will ensure compliance for the next three (3) years. The special price for SESCO clients is $15.00.

Impact on the States:
Employers of employees who are subject to both state and federal minimum hourly wage rates will have to comply by paying the employee the greater of the two rates. In addition, there are several states whose wage rates are tied to changes in the federal rate. The following states will automatically see increases in their state hourly minimum wage rate on July 24, 2007:

Texas. Texas law provides that the state minimum wage rate is to be the same as the federal rate. Thus, the minimum wage in Texas will increase to $5.85 per hour on July 24, 2007.

Virginia. Virginia law provides that the state minimum hourly wage rate is to be the same as the federal rate. Thus, the minimum wage rate in Virginia will increase to $5.85 per hour on July 24, 2007. The state's minimum wage applies to employees of employers having four or more employees (not including family members) who are age 16 and over.

The following states have minimum wage rates that, on July 24, 2007, will remain higher than the federal minimum hourly wage rate:

In the District of Columbia the minimum wage rate is $7.00 per hour.

ICE Turns Up The Heat On Immigration Violations

The Department of Homeland Security's Immigration and Customs Enforcement (ICE) has declared that it is "dramatically enhancing its enforcement efforts against employers that knowingly employ illegal aliens." They aren't kidding. In fiscal year 2006, ICE set records for worksite enforcement. It arrested 716 individuals on criminal charges (against both employers and employees) and 3,667 individuals on administrative charges. Combined, these figures are more than seven times greater than the total number of individuals arrested in worksite enforcement cases in 2002, the last full year that the INS was in operation.

It's not just large companies that need to worry about ICE breathing down their neck. Said an ICE official: "No matter how large or how small the company, ICE has no tolerance for individuals who use illegal aliens in their workforce."

And, as the following cases show, ICE is not only going after employers, but the individual executives and managers who actually hire illegal workers are being held accountable.

In March, ICE arrested the owner and three managers of a Massachusetts-based company for allegedly knowingly accepting fraudulent "green cards" and Social Security cards, among other charges. If convicted, each of the four individuals could face up to 10 years in prison and a $250,000 fine.

Late last year, two executives of a California company pleaded guilty to knowingly hiring illegal immigrants. One agreed to pay a fine of $200,000; the other, $100,000.

Even if you don't knowingly hire illegal aliens, inadvertent I-9 mistakes can still result in penalties, not to mention the sudden loss of workers if ICE audits your records and removes employees who are not eligible to work in the U.S. Be sure you:

? Understand which documents are acceptable. The I-9 form published by the government is outdated in this respect.

To help SESCO clients ensure that your I-9 forms will pass an ICE investigation, SESCO has developed the Complete I-9 Compliance Kit. Call SESCO to order your compliance kit.

"Stephanie was the best speaker at the conference and many women have asked to have her back. She conveys information clearly and succinctly in a manner that keeps the audiences attention. She is really an asset to SESCO and I think that her presentation should result in some calls for assistance!" 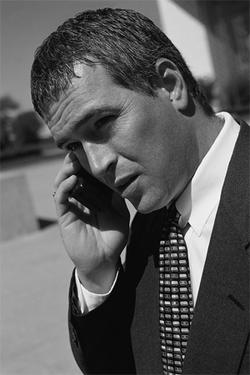 As technology gets smaller, faster, more portable, more versatile, more and more employees are staying wired 24/7. When cell phones and pagers first gained popularity, SESCO advised clients to establish workplace policies simply because of the performance and client service issues created by employees continually being interrupted or utilizing these devices. It is still SESCO's strong recommendation that employers adopt not only cell phone and pager policies, but policies expanded to cover items such as PDA's (not used or assigned for business use), camera phones, PDA's and phones with recorders, Ipods and other personal, hand-held electronic devices.

If performance issues were not enough, these electronic devices are now creating legal risks for employers, creating a new emphasis on effective policy and enforcement
thereof. Legal liability includes:

1. Driving while distracted. First, it was talking on cell phones and driving don't mix. States started passing laws prohibiting this practice, some making an exception for hands-free talking. (Although whether using headsets is safer is arguable, according to studies.) Now, there's a new electronic distraction: texting. On May 11, Washington State passed the nation's first law banning texting while driving.

Your legal risk: It's high if employees get into car accidents while making work-related calls or texting business associates. It's also possible if the calls/texts are personal, but the employee is driving for business reasons.

2. Physical ailments. There's no shortage of computer keyboards, mice, desks, and chairs to ensure employees are working in ergonomically correct offices. Now, what about work that's done outside the office, on PDAs a fraction of the size of a standard keyboard? A new problem has emerged, known as "BlackBerry Thumb."

Your legal risk: Repetitive stress injuries could lead to Workers' Comp claims, and if the injury is severe enough, the Americans with Disabilities Act (ADA) could also come into play.

Your legal risk: Non-exempt employees must be paid for all hours worked, including overtime after 40 hours/week (in some states, after eight hours/day). Even exempt employees, whose pay does not vary according to the number of hours worked and who do not receive overtime pay, could create a pay problem. Because they must be paid their full salaries for any week in which they perform work (whether they work 50 hours or five), a week off that would have been unpaid could earn them a paycheck.

SESCO's staff recommendation: Policies and management practices must be consistent and sincere in conveying the message to employees that they are not expected to be wired to work at all times or to utilize personal electronic devices including cell phones for non-business purposes during working time. This could include going so far as to ban electronic devices unless specifically required or authorized for business purposes during working hours. Additionally, employers need to carefully monitor employees' work activities after hours and take disciplinary steps against those who continue to work on PDA's when not specifically requested or authorized to do so.

Question: Are staffing firm workers "employees" within the meaning of the federal employment discrimination laws?

Answer: Yes, in the great minority of circumstances. The threshold question is whether a staffing firm worker is an "employee" or an "independent contractor." The worker is a covered employee under the anti-discrimination statutes if the right to control the means and manner of her work performance rests with the firm and/or its client determinative. One must consider all aspects of the worker's relationship with the firm and the firm's client. As the Supreme Court has emphasized, there is "no shorthand formula or magic phrase that can be applied to find the answer...all incidents of the relationship must be assessed with one factor being decisive."